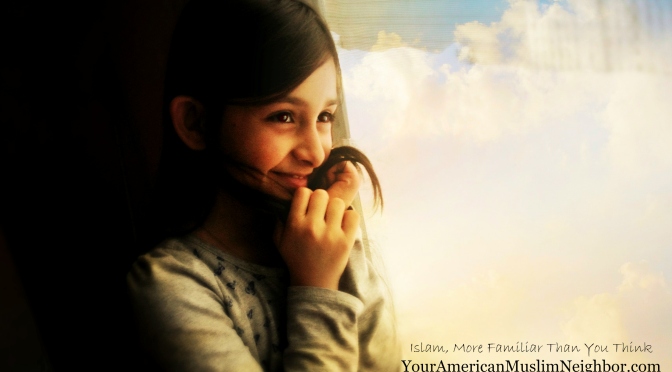 My 8 year old daughter was explaining to me, while she read an article for homework, about the astonishing variety of species of catfish, and just how unbelievable it is, that a bullfrog tadpole can take three years to mature…

I watched her radiant face and listened to her voice, elevated with excitement,

but I could hardly pay attention.

It started when I began thinking about how much she loves science and I thought about how she may choose to study some type of biology after high school.

But then, the current events began pushing their way into my thoughts.

I wonder if it will be her generation that the prophet Muhammad talked about, when he said,

“There will come upon the people a time when holding onto the religion will be like holding onto hot embers.” (Tirmidhi)

Today there are so many people, from so many directions, out to destroy Islam.

We have these crazy terrorists who, by their horrific acts of violence, defile Islam. They add fuel to the fire and help grow and multiply the very things they claim to want to ‘avenge’.

We’ve got Christian missionaries, with their very creepy version of Islam that they tote around, event to event, teaching leaders and pastors about ‘Islam’; only – they are lying through their teeth – Effectively convincing congregation after congregation, that Islam is something totally unlike it really is.

Then you’ve got the political pundits – demonizing Islam and Muslims is merely a means to their end. I and my children’s lives, ‘collateral damage’ in the race to gain (or rather maintain) control of a region.

But the people staring blankly, while the blue light of the TV dances over their frozen faces, don’t know any better; all they know is:

They just hate me; my baby with her innocent face and mind alive with curiosity about so many wonderful things…

Sometimes I feel like a ninja, thwarting attack after attack. For every post on Facebook I make, with texts from the Quran, or the sayings of the prophet Muhammad, to show how good, beautiful, and tolerant Islam encourages people to be,

I am attacked as if by wolves.

and regularly invited to worship Jesus instead of my Creator.

But I have surety in my heart and in my mind. I ask God to give me strength, patience and kindness – To act in the way He instructed me:

“Many of the followers of previous books wish that they could turn you back into disbelievers after you have believed” – “but pardon and forgive.” (Quran 2:109)

I know all my husband and I can do is try to raise our babies the best we can, to pray for them, and to inculcate in them, this forgiveness and patience.

No matter what the climate, there will always be trials and tribulations of one sort or another. My concern for my children, is that they hold on to those burning embers; that they cling to Islam and never let go, even for a second.

Even if it costs them everything else.

No amount of suffering could ever make letting go, worth it.

I’d rather my child succumb to the wolves while huddled over her Islam – protecting it with her life – than to let it go and walk away with the pack. Because that would truly be losing everything.

So, while I fantasize about my intelligent daughter, filled with energy, a marine biologist, out on a mission in a blue sea with a smile on her face, the sun reflecting off the water and lighting her eyes, so filled with life – While I dream about her living without a care in the world beside her passion; I know – well, at least I fear – that her life will be far from easy.

Our feet must be planted firmly to withstand the currents.

To withstand the wolves.