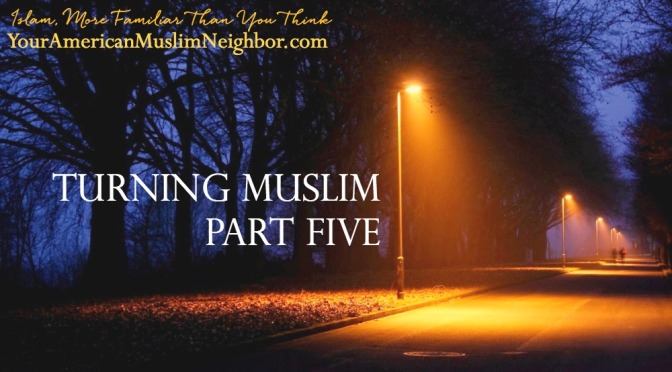 I had travelled across the country. Detaching from the luxuries of my life and witnessing breathtaking expanses of earth.

I had travelled overseas, where I was humbled by the experience of being a foreigner and gained a new perspective from the point of view of “the other”.

I travelled to the Middle East, driven by the intense feeling of a need to know. There, I faced soldiers with M-16’s and came within feet of massive tanks that made my nerves quake. Amidst what looked like misery I found a gem, a light that somehow gave people who should be in despair, strength and patience. It was Islam.

I had been reading their Quran, because I was so sure it was a manmade farce and I wanted to expose it to the world. But, it had defied my expectations. It had begun to make inroads, as it spoke directly to me about my life, as it answered questions I thought had no answers. I tried hard to ignore the way it was growing on me.

But, those Muslims, while trapped in their dwellings under curfew, they told me about Quranic prophecies come true. They frequently remembered God and often thanked him in spite of their suffering. They told me about Him with some words, but I learned even more through their actions.

The strangeness of the women with scarves over their hair began to fade. Instead of avoiding them, which was my first instinct, I was obliged to sit with them – which led to talking with them. Their scarves didn’t cover their humanity, their intelligence, their kindness, the beauty of their hearts, or the sparkle of aspiration in their eyes.

On one occasion I sat with a group of women in a ground floor apartment; the floors above us were full of brusque military personnel. They were guarding the doors, so we were just sitting together, waiting. A middle-aged woman sat across from me, smiling a wide, pleasant smile.

She told me that I was so nice I should be Muslim too.

A compliment that one year prior would have been insulting to my ears.

But instead of insulted by her statement, I felt honored.

More important than the people, was the recitation of the Quran. Walking through lively streets that had previously been desolate and dangerous for 20 full days, I heard a beautiful sound. A sound that was like life after death, like the way the streets had been empty, desolate and frightful, yet suddenly they were safe, alive, with smiling eyes and relieved embraces between people kept apart too long.

I didn’t stop myself from saying out loud, “It’s so good to hear music!”

And the lady I was walking with didn’t stop herself from laughing out loud at me. She informed me, in a gentle way, “That’s not music, that’s the Quran.“

And with those words my heart might have stopped. It was one of those moments where everything suddenly came into perspective. It just clicked.

That sound of the Quran, and the sound of the call to prayer, they rose above the roughness of the world. They floated above it all. They streamed past my ears directly to my heart; like the way my mom used to lovingly wake me up on a Saturday morning, they woke up my soul.

When I left that place -A place where I had been closer to death and brutality than ever before, I left alive and awake. With a new determination and hope.

When I returned home, I was thirsty – Thirsty like someone who had been wandering a desert for 22 years. The only thing that would satisfy my thirst was more knowledge about Islam.

I had to know more. The library became my oasis and I read and read and read. I drank in every bit of information I could about Islam. I read books by Muslims and non-Muslims. For months, I studied and I pondered and I deliberated within myself.

Finally, one evening in the library with a pile of open books in front of me, I stared in disbelief at the words on the pages. There is nothing worthy of worship except God, and Muhammad is His messenger.

This can’t be happening.

The library had to close its doors. I mechanically made my way out through the campus and onto the sidewalk. The streets of Brooklyn glisten in the warm artificial light of the street lamps.

My shock culminated in elation. It was true.

I gratefully surrendered to the Owner of the heavens and the Earth, under the streetlamp on a balmy autumn night. It was as if the trees and lights glistened and danced in happiness with me as I continued the rest of the way to my apartment. To my new life.